Back in North Wales for a long weekend, my choice of mark was heavily reliant on the weather. I would ideally liked to have fished for tope for the whole duration, but a predicted 4ft swell at the mark I wanted to fish meant that it wasn't even worth going to check it was fishable for the first few days.

So day 1, I stayed on Anglesey for the day fishing at a wrasse mark of mine on the north coast during the day and then moving to the west coast for a bash at the rays/huss. The hours of light saw plenty of ballans caught with the largest being around the 3lb mark. Other species landed including pout, Pollack, rockling, poor cod, corkwing and goldsinney wrasse.

As the light faded it was time to switch venue. For this session I was joined by mates Rich (flyfish) and Ash. Getting down early to the mark in an attempt to get a few whiting for bait, I was soon rewarded with a couple before the lads arrived as well as a lonely dab.
As the tide dropped, it was soon time to start preparing the ray gear and conditions were far better than I could have hoped for, the tide, wind and swell being as close to perfect as I've ever seen, things were looking very good. Whilst me and Ash concentrated on them, Rich set his sights on the congers.

My first ray of the evening came swiftly after casting out a double sandeel bait, a small thorny of around 3lb. This was shortly followed by a second and then a third, all in this size bracket. Whilst I was bagging up on rays though, Ash was struggling to wade through the local doggie population, pulling them out one after the other throughout the period of slack water. Rich then started to get a little action, firstly a few small taps which never developed and then after a recast, a proper pull down and a fish on for a short period of time, which managed to throw the hook before we could get a look.


﻿
As the low water approached my confidence grew and true to form, right on the prime time my rod slowly pulled round. Picking the rod up, the fish continued to pull away from me, so I struck instantly, this was a good fish. Playing it as hard as I dared to the edge, I soon found myself stuck on a ledge around 15 yards out, with the fish doing a good job of staying deep. After giving a little slack though, the fish popped up over the ledge and Rich risked getting wet feet in order to grab it from the oncoming swell and lift it onto the rocks. BOOM, this was the double i'd been after for 4 years whilst at University, but just how big was it. Well on Rich's scales it went 14lb, but fortunately there was another bloke close by to lend us his more accurate scales for a second opinion, pulling his scales down to 13lb 6oz, what a fish! 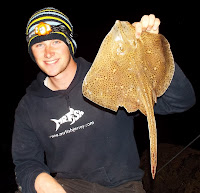 At this point, I was very tempted to quit whilst I was ahead, but lets be honest, I would have been stupid to do that. As it happens, I was wise to continue with the following few hours resulting in another small thorny, my first ever blonde ray from this mark and a sixth thorny which was another nice fish of around the 7lb mark.

Eventually though, enough was enough and with 7 rays including a massive new PB I couldn't have asked for a better return.

Thanks for reading,
Tight Lines,
Ross